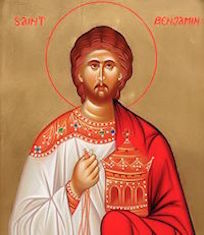 The Christians in Persia had enjoyed twelve years of peace during the reign of Isdegerd, son of Sapor III, when in 420 it was disturbed by the indiscreet zeal of Abdas, a Christian Bishop who burned the Temple of Fire, the great sanctuary of the Persians. King Isdegerd threatened to destroy all the churches of the Christians unless the Bishop would rebuild it.

As Abdas refused to comply, the threat was executed; the churches were demolished, Abdas himself was put to death, and a general persecution began that lasted forty years. Isdegerd died in 421, but his son and successor, Varanes, carried on the persecution with greater fury. The Christians were submitted to the most cruel tortures.

Among those who suffered was St. Benjamin, a deacon, who had been imprisoned a year for his Faith. At the end of this period, an ambassador of the Emperor of Constantinople obtained his release on condition that he would never speak to any of the courtiers about religion.

St. Benjamin, however, declared that it was his duty to preach Christ and that he could not be silent. Although he had been liberated and the agreement made between the ambassador and the Persian authorities, he would not acquiesce in it, and neglected no opportunity of preaching. After untold suffering and tortures, St. Benjamin died a Martyr about the year 420.

PRAYER: Almighty, ever-living God, You enabled St. Benjamin to fight for justice even unto death. Through his help, grant that we may tolerate all adversity and hasten with all our might to You Who alone are life. Amen.
Saint of the Day
5. Dedication of Our Lady of the Snows
We Remember
August
Merciful Jesus, grant them eternal rest.
Mass Schedule:
7:30 AMMonday:
7:30 AMTuesday:
7:30 AMWednesday:
7:30 AMThursday:
7:30 AMFriday:
8:00 AMSaturday:
8:00 AMSunday:
8:00 AMHolidays:
Holy Hour - Adoration:
Thursday before First Friday: 7:00 - 8:00 PM