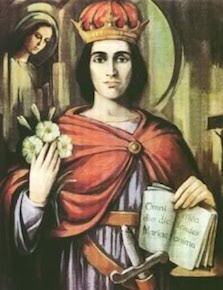 St. Casimir was the third among the thirteen children of Casimir III, King of Poland. He was born on October 5, 1458. Although educated in a royal court, he had a horror of luxury and practiced many mortifications in secret. Under the care of the holy canon, John Dugloss, he grew up in singular innocence. One of his principal devotions was to the Blessed Virgin, in whose honor he composed, or al least frequently recited, the well-known “Hymn of St. Casimir.”

When the crown of Hungary was offered to him, St. Casimir marched at the head of an army of 20,000 men to the frontier, to comply with his father’s will. The reigning King of Hungary whom the people wished to dethrone was Matthias Corvinus. On reaching the frontier and learning that the differences between King and people had been adjusted, St. Casimir gladly returned home. Realizing afterward injustice of the attempt against the King of Hungary, he could never be prevailed upon to assume the crown when the Hungarian again offered to him.

To the end of his life, St. Casimir preserved untainted his purity of soul and body, nor could he ever be induced to enter the state of matrimony. A lingering tuberculosis ended his brief career, which was brought to a close at Vilna, the capital of Lithuania, in 1484.

PRAYER: Almighty God, to serve You is to reign. By the interceding prayers of St. Casimir help us ever to serve You in sanctity and justice. Amen.
Saint of the Day
3. St. Thomas, Apostle
We Remember
July
Merciful Jesus, grant them eternal rest.