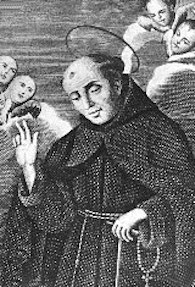 St. Joseph of the Cross was born in 1654 on the island of Ischia, near Naples. In his sixteenth year he entered the Franciscan Order of the Strictest Observance, or Reform of St. Peter of Alcantara. Such was the edification he gave in his Order that within three years after his profession he was sent to found a monastery in Piedmont. He became a priest out of obedience, and obtained, as if seemed, and inspired knowledge of Moral Theology.

With his superiors’ permission John built another monastery and drew up rules for that community, which were confirmed by the Holy See. He afterward became master of novices. Some time later he was made provincial of the province of Naples, erected in the beginning of the 18th century by Pope Clement XI.

The Saint succeeded in instilling in the hearts of his subject the double spirit of contemplation and penance bequeathed to his Reform by St. Peter of Alcantara.

St. John Joseph exemplified the most sublime virtues, especially humility and religious discipline. He also possessed numerous gifts in the supernatural order, such as those of prophecy and miracles. Finally, consumed by labors for the glory of God, he was called to his reward. Stricken with apoplexy, he died and octogenarian in his monastery at Naples, March 5, 1734, and was canonized in 1839 by Pope Gregory XVI.

PRAYER: God, You inspired St. John Joseph to strive for perfect charity and so attain Your Kingdom at the end of his pilgrimage on earth. Strengthen us through his intercession that we may advice rejoicing in the way of love. Amen.
Saint of the Day
3. St. Thomas, Apostle
We Remember
July
Merciful Jesus, grant them eternal rest.