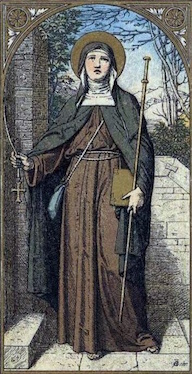 St. Colette was born at Corbie, France, in 1381 of humble and aged parents. When she was twenty-two, her parents died and she began life as an anchoress according to the Rule of the Third Order of St. Francis. After four years of this life, she was inspired in 1406 to introduce the strict observance of St. Clare, which was only observed in a modified form at her time.

Entrusted with the reform of the Third Order by Pope Benedict XIII, St. Colette traveled the length and breadth of France and Flanders founding or reforming convents; and in doing so she is said to have met St. Joan of Arc at Moulins in 1429. Over the course of forty years, she surmounted many spiritual and physical obstacles to establish fifteen communities of reformed Poor Clares. One branch of the Order is still called the Colettines after her.

This holy and indefatigable worker for God died in 1447 at the community she had founded in Ghent. She was canonized in 1807 by Pope Pius VII.

PRAYER: Lord, our God, grant that Your faithful spouse, St. Colette, may enkindle in us the flame of Divine love that she enkindled in other virgins for the everlasting glory of Your Church. Amen.
Saint of the Day
3. St. Thomas, Apostle
We Remember
July
Merciful Jesus, grant them eternal rest.