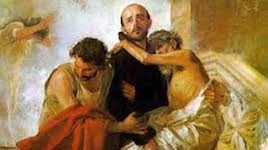 St. John was born in Portugal in 1495 of humble bur virtuous parents. His early years were spent as a shepherd, in great innocence and virtue; but in 1522 he enlisted in a military company and served against the French and, later, the Turks in Hungary, while Charles V was King of Spain. Evil associations caused his piety to decline, but in 1536 he left the army and entered the service of a lady near Seville as a shepherd.

At about forty years of age, John resolved upon an entire change of life and began to devote himself to the service of God. After some vicissitudes he settled in Granada in 1538 and opened a shop. The sermons of St. John of Avila impressed him to such a degree that in order to draw humiliations upon himself, he acted as a madman. He desisted from this extraordinary conduct by the command of the holy preacher.

In 1540, St. John hired a house to harbor sick persons, and thus laid the foundations of a new Order, the Brothers Hospitallers of St. John of God. He devoted himself to the care of the sick. After ten years of hard labor his health deteriorated. His last illness, as the latter portion of his life had been, was most edifying. He expired on his knee before the altar, March 8, 1550, and was canonized in 1690 by Pope Alexander VIII.

PRAYER: God, You filled St. John with the spirit of compassion. Grant that by practicing works of charity we may deserve to be numbered among the Saints in Your Kingdom. Amen.