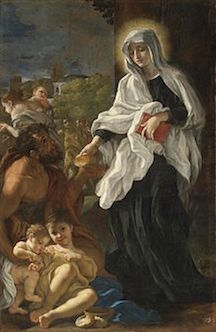 Patroness of Widows and Motorists

St. Frances was born in Rome of a noble family in 1384. She wished to enter a monastery, but in obedience to her parents, at the age of twelve, she entered into a marriage contract with a wealthy nobleman named Lawrence Ponziani.

In the matrimonial state the Saint led a very pious life, though she never allowed her spiritual exercises to interfere with her domestic duties. She had to endure many trials, particularly during the great schism, when her husband was banished; but she suffered all with exemplary patience, blessing the holy will of God.

After the schism St. Francis’s husband recovered his estates. In 1425, she founded the Oblate Congregation of Tor di Specchi, to which she gave the Rule of St. Benedict. After the death of her husband she received the habit in this community in 1437, and began to live as though she were the lowest of the sisters. Soon after, she was chosen superior. God conferred upon her numerous favors in the supernatural order. She died March 9, 1440, at the age of fifty-six and was canonized in 1608 by Pope Paul V.

PRAYER: God, in St. Frances You have given us a singular example of both the monastic and the conjugal was of life. Help us to persevere in serving You so that in all the vicissitudes of life we may both look to You and follow You. Amen.
Saint of the Day
3. St. Thomas, Apostle
We Remember
July
Merciful Jesus, grant them eternal rest.