2. St. Athanasius, Bishop and Doctor of the Church

St. Athanasius, Bishop and Doctor of the Church 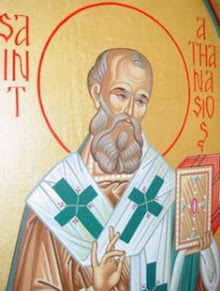 St. Athanasius, the great champion of the Faith, was born at Alexandria, about the year 296, of Christian parents. Educated under the eye of Alexander, later Bishop of his native city, he made great progress in learning and virtue. In 313, Alexander succeeded Achillas in the Patriarchal See. and two years later St. Athanasius went to the desert to spend some time in retreat with St. Anthony.

In 319, St. Athanasius became a deacon, and even in this capacity he was called upon to take an active part against the rising heresy of Arius, an ambitious priest of the Alexandrian Church who denied the Divinity of Christ. This was to be the life struggle of St. Athanasius.

In 325, the Saint assisted his Bishop at the Council of Nicaea, where his influence began to be felt. Five months later Alexander died; on his deathbed he recommended St. Athanasius as his successor. In consequence of this Athanasius was unanimously elected Patriarch in 326.

Refusal to tolerate the Arian heresy was the cause of many trials and persecutions for St. Athanasius. He spent seventeen of forty-six years of his episcopate in exile. After a life of virtue and suffering, this intrepid champion of the Catholic Faith, the greatest man of his time, died in peace on May 2, 373.

PRAYER: Father, You gave us St. Athanasius, Your Bishop, to defend the Divinity of Your Son. Grant that we may rejoice in his teaching and protection and grow continually in our knowledge and love of You. Amen.