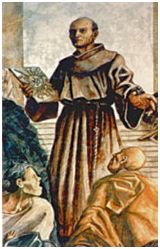 Patron of Advertisers and Publicists

The Republic of Siena was the country of St. Bernardine. He was born at Massa in that territory in 1380. Left an orphan at early age, he was educated by his pious aunt, who loved him as if he had been her own son. Even his first years were brightened by his proficiency in study.

As a member of the Confraternity of Our Lady, Bernardine served the sick in the hospital; nor did he desist when the great pestilence broke out in 1400. He even persuaded other young men to share these arduous labors. Four years later he entered among the Fathers of the Strict Observance of the Order of St. Francis.

On becoming a priest the Saint devoted himself to the office of preaching. For fourteen years his labors were confined to his own country, where devotion to the Holy Name of Jesus, which he extolled, became widespread. As his reputation spread, however, he gradually became the apostle of Italy in the 15th century. In 1427, he refused the Bishopric of Siena; in 1431, that of Ferrara; and again, in 1435, that of Urbino. The wondrous results of his sermons became a byword.

Though Bernardine was followed by honors and applause, the most sincere humility appeared in his actions, and he always sought to conceal the talents with which God had endowed him. In 1435, he was appointed vicar-general of the Strick Observance, but after five years he obtained his release from this office and in his old age continued the work of preaching in Romania, Ferrara, and Lombardy. He died in 1444 and was canonized in 1450 by Pope Nicholas V.

PRAYER: God, You gave St. Bernardine Your Priest an exceeding love for the Holy Name of Jesus. Through his merits and prayers grant that we may ever be inflamed with the spirit of Your love. Amen.
Saint of the Day
The First Holy Martyrs of the Holy Roman Church
We Remember
June
Merciful Jesus, grant them eternal rest.
Mass Schedule:
7:30 AMMonday:
7:30 AMTuesday:
7:30 AMWednesday:
7:30 AMThursday:
7:30 AMFriday:
8:00 AMSaturday:
8:00 AMSunday:
8:00 AMHolidays:
Holy Hour - Adoration:
Thursday before First Friday: 7:00 - 8:00 PM