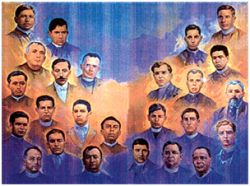 Beginning in 1911, Mexico underwent a revolution, which brought to power a government that was, to say the least, strongly anticlerical. As a result, this event inaugurated a bitter struggle between the civil authorities and the Catholic Church, which had aided the people of Mexico from the 16th century.

The authorities wanted to impose a Mexican Church on the country, replacing Catholic Bishops with schismatic prelates. To attain that goal, they mounted a full-sale campaign of terror against the Church.

The government expelled foreign missionaries and closed schools and seminaries. Eventually even churches were closed, priest became hunted men, and Catholics were warned to renounce the Church and Christian worship.

This persecution gave rise to the growth of the Catholic Action Movement, which fought against the government’s repression. Over the period from 1915 to 1937 its members like Christopher Magallanes and twenty-four companions chose to die rather than give up their faith.

These Martyrs included twenty-two priests and three laymen: Manuel, David, and Salvador. They died in different places and at different times. What bound them together was their championing of the Faith in the face of death.

Fifteen of the Martyrs were slain in Jalisco, four in Zacatecas, and one each in Chihuahua, and Morelos. All endured torture before their deaths, most of which occurred by firing squads.

PRAYER: Almighty and eternal God, You kept St. Christopher and his Companions faithful to Christ the King even to undergoing martyrdom. Through their intercession grant that we may persevere in professing the true Faith and always heed the commands of Your love. Amen.
Saint of the Day
The First Holy Martyrs of the Holy Roman Church
We Remember
June
Merciful Jesus, grant them eternal rest.
Mass Schedule:
7:30 AMMonday:
7:30 AMTuesday:
7:30 AMWednesday:
7:30 AMThursday:
7:30 AMFriday:
8:00 AMSaturday:
8:00 AMSunday:
8:00 AMHolidays:
Holy Hour - Adoration:
Thursday before First Friday: 7:00 - 8:00 PM