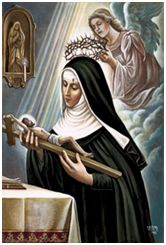 St. Rita was born at Spoleto, Italy, in 1381. At an early age she begged her parents to allow her to enter a convent. Instead they arranged a marriage for her.

Rita became a good wife and mother, but her husband was a man of violent temper. In anger he often mistreated his wife. He taught their children his own evil ways. Rita tried to perform her duties faithfully and to pray and receive the Sacrament frequently.

After nearly twenty years of marriage, Rita’s husband was stabbed by an enemy but before he died he repented because Rita prayed for him.

Shortly afterward her two sons died, and Rita was alone in the world. Prayer, fasting, penances of many kinds, and good works filled her days. She was admitted to the convent of the Augustinian nuns at Cascia in Umbria, and began a life of perfect obedience and great charity.

Sister Rita had a great devotion to the Passion of Christ. “Please let me suffer like You, Divine Savior, “ she said one day, and suddenly one of the thorns from the crucifix struck her on the forehead. It left a deep wound that did not heal and that caused her much suffering for the rest of her life. She died before 1457, and was canonized in 1900 by Pope Leo XIII.

PRAYER: Father in heaven, You granted to St. Rita a share in the Passion of Your Son. Give us courage and strength in time of trial, so that by our patient endurance we may enter more deeply into the Paschal Mystery of Your Son. Amen.
Saint of the Day
The Conversion of St. Paul, Apostle
We Remember
January
Merciful Jesus, grant them eternal rest.
Mass Schedule:
7:30 AMMonday:
7:30 AMTuesday:
7:30 AMWednesday:
7:30 AMThursday:
7:30 AMFriday:
8:00 AMSaturday:
8:00 AMSunday:
8:00 AMHolidays:
Holy Hour - Adoration:
Thursday before First Friday: 7:00 - 8:00 PM