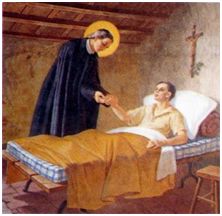 The Apostle of the abandoned

Born at Voltaggio, Italy, in 1698. St. John received an excellent education and was ordained in 1721. Shortly thereafter he was afflicted with epilepsy and devoted his ministry to the poor of the Campagna. For the nest forty years he performed labors that would have taxed the strength of a robust man.

John ministered to the sick and poor in St. Gall, the night hospice for paupers founded by Celestine III, and in the hospital of the Trinity. Early in the morning and late every night he sought out the cattle-drivers and teamsters in the Roman market, gaining their confidence, instructing them, and preparing them for the Sacraments. Another class of people to whom his pity was extended comprised the homeless women and girls who wandered around begging or walked the streets by night. With the pittance he received in Mass stipends he rented a house behind St. Gall and housed them there.

As an assistant priest John spent many hours hearing confessions, especially of the poor and unlearned. On succeeding to the canonry of St. Mary in Cosmedin in 1735, he turned over all income to charitable causes and lived most frugally. He was given the unusual faculties of hearing confessions in any demand for parish missions. Often, he preached five and six times a day in churches, chapels, convents, hospitals, barracks and prisons.

Such extraordinary zeal and labor eventually took its toll and Saint’s health broke down. He retired hospital of the Trinity, which he had so often frequented, and died of a stroke on May 23, 1764. Since he died without a penny, this “Hunter of souls” was buried at the expense of the hospital. He was canonized in 1881 by Pope Leo XIII.

PRAYER Almighty, eternal God, You dedicated the joy of this day to the glorification of St. John. Mercifully grant that we may always strive to retain and complete by our works that Faith which he continually proclaimed with unwearying zeal. Amen.
Saint of the Day
The Conversion of St. Paul, Apostle
We Remember
January
Merciful Jesus, grant them eternal rest.
Mass Schedule:
7:30 AMMonday:
7:30 AMTuesday:
7:30 AMWednesday:
7:30 AMThursday:
7:30 AMFriday:
8:00 AMSaturday:
8:00 AMSunday:
8:00 AMHolidays:
Holy Hour - Adoration:
Thursday before First Friday: 7:00 - 8:00 PM