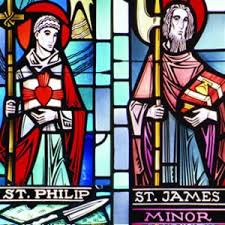 St. Philip, a native of Bethsaida in Galilee, was called by our Lord the day after St. Peter and St. Andrew. We learn from tradition that he was then married man, and that he had several daughters, three of whom reached eminent sanctity. Like the other Apostles, St. Philip left all things to follow Christ. His name is frequently mentioned in the Holy Gospels.
After the Ascension of his Divine Master, St. Philip preached the Gospel in that part of Asia Minor called Phrygia, which was then a province of the Roman Empire. It is supposed that he was buried at Hierapolis in Phrygia.

St. James the Less, the author of the first Catholic Epistle, was the son of Alpheus (also known as Cleophas). His mother Mary was either a sister or a close relative of the Blessed Virgin, and for that reason, according to Jewish custom, he was sometimes called the brother of the Lord.

The Apostle held a distinguished position in the very early Christian community of Jerusalem. St. Paul tells us he was a witness of the Resurrection of Christ; he is also called a “pillar” of the Church, whom St. Paul consulted about the Gospel.
He was the first Bishop of Jerusalem, and was at the Council of Jerusalem about the year 50. The historians Eusebius and Hegessipus relate that St. James was martyred for the Faith by the Jews in the Spring of the year 62, although they greatly esteemed his person and had given him the surname of “James the Just.”

St. James has always been recognized as the author of the Epistle that bears his name. Internal evidence based on its language, style, and teaching reveals its author as a Jew familiar with the Old Testament, and a Christian grounded in the teaching of the Gospel. External evidence from the early Fathers and Councils of the Church confirms its authenticity and canonicity.

The date of its writing cannot be determined exactly. According to some scholars it was written about the year 49 A.D. Others, however, claim it was written after St. Paul’s Epistle to the Romans (composed during the winter of 57-58 A.D.). It was probably written between the years 60 and 62 A.D.

St. James addressed himself to the “twelve tribes that are in the Dispersion,” that is, to Christians outside Palestine; but nothing in the Epistle indicates that he is thinking only of Jewish Christians. St. James realizes full well the temptations and difficulties they encounter in the midst of paganism, and as a spiritual father he endeavors to guide and direct them in the Faith. Therefore the burden of his discourse is an exhortation to practical Christian living.

PRAYER: Lord God, You give us joy every year on the feast of Your Apostles Sts. Philip and James. Through their prayers let us share in the Passion and the Resurrection of Your only-begotten Son and help us merit the eternal vision of Your glory. Amen.
Saint of the Day
The Conversion of St. Paul, Apostle
We Remember
January
Merciful Jesus, grant them eternal rest.
Mass Schedule:
7:30 AMMonday:
7:30 AMTuesday:
7:30 AMWednesday:
7:30 AMThursday:
7:30 AMFriday:
8:00 AMSaturday:
8:00 AMSunday:
8:00 AMHolidays:
Holy Hour - Adoration:
Thursday before First Friday: 7:00 - 8:00 PM