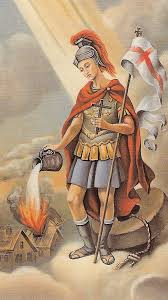 There is much evidence that Florian was a high-ranking officer in the Roman army stationed at Noricum, which is part of modern Austria. It is also clear that he suffered martyrdom in the time of Diocletian about 304. The Acts of his martyrdom date only from the 8th century, but while regarded s legendary they are also assigned a definite historical basis by scholars.

These state that while the soldiers of Aqulinus the governor were in the process of arresting Christians in their area, Florian surrendered to the governor and admitted that he too was a Christian. He underwent a horrific scourging in a futile effort to have him renounce his Faith.

When the Saint remained steadfast to the Lord, a stone was placed around his neck and he was thrown into the river Enns, achieving his martyrdom. His body was recovered and brought tot the Augustinian Abbey of St. Florian near Linz. Later, the body was transferred to Rome.

In 1138, Pope Lucius III gave some of the Saint’s relics to King Casimir of Poland and to the Bishop of Krakow.

Devotion to this Saint grew throughout Central Europe. Many miracles of healing are attributed to his intercession, and he is invoked against danger from fire or water. He is also a Patron of Poland and Upper Austria.

PRAYER: God of power and mercy, through Your help St. Florian has overcome the tortures of his passion. Help us who celebrate his triumph to remain victorious over the wiles of our enemies. Amen.