10. St Leo the Great, Pope and Doctor of the Church

St Leo the Great, Pope and Doctor of the Church 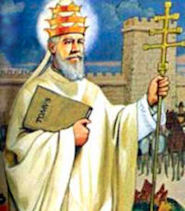 St. Leo the Great was born in Tuscany. As deacon, he was dispatched to Gaul as a mediator by Emperor Valentinian III. He reigned as Pope between 440 and 461. He persuaded Emperor Valentinian to recognize the primacy of the Bishop of Rome in an edict in 445. The doctrine of the Incarnation was confirmed by him in a letter to the Patriarch of Constantinople, who had already condemned Eutyches, who held that Christ had only one nature. At the Council of Chalcedon in 451, this same letter was confirmed as the expression of Catholic Faith concerning the Person of Christ.

All secular historical treatises eulogize Leo’s efforts during the upheaval of the 5th century barbarian invasion. His encounter with Attila the Hun, at the very gates of Rome, persuading him to turn back, remains a historical memorial to his great eloquence. When the Vandals under Genseric occupied the city of Rome he persuaded the invaders to desist from pillaging the city and harming its inhabitants. He died in 461, leaving many letters and writings of great historical value.

PRAYER: God, You established Your Church on the solid rock of the Apostles and You will never allow the powers of hell to dominate her. Grant that she may persevere in Your truth and enjoy continual peace through the intercession of Pope St. Leo. Amen.
Saint of the Day
4. St. John Vianney
We Remember
August
Merciful Jesus, grant them eternal rest.
Mass Schedule:
7:30 AMMonday:
7:30 AMTuesday:
7:30 AMWednesday:
7:30 AMThursday:
7:30 AMFriday:
8:00 AMSaturday:
8:00 AMSunday:
8:00 AMHolidays:
Holy Hour - Adoration:
Thursday before First Friday: 7:00 - 8:00 PM