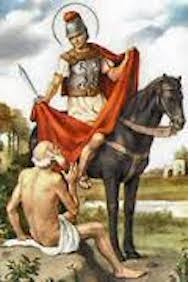 Patron of Beggars and Soldiers

This great and renowned Saint was born in Pannonia about 317. The son of pagan parents, he early became a catechumen and served in the Roman army until, after he had given half his cloak to a beggar at Amiens, a vision of Christ (about 339) impelled his to Baptism and the religious life.

Martin was ordained an exorcist by St. Hilary, Bishop of Poitiers, and spent the ensuing years in various places, for some time leading the life of a hermit off the Italian coast. He had the happiness of converting his mother and also was flogged for offering public opposition to the Arians. Upon St. Hilary’s return from exile, st. Martin rejoined him and built a monastery at Ligugé where he lived until being chosen Bishop of Tours in 371.

In his dignity Martin continued to lead the same humble and mortified life as before. At first he lived in a little cell near the church, but he afterward laid the foundations of the celebrated monastery of Marmoutier, which then consisted only of a series of grottoes in the rock, or of wooden cells, in which the holy Bishop and his disciples dwelt and performed their exercises of piety. A number of disciples flocked to his monastic standard, and he thus became the founder of monasticism in Gaul, as St. Anthony had been in Egypt and St. Hilarion in Palestine. This monastery also became a nursery of Bishop, such was the reputation of the disciples of St. Martin.

The zealous labors of the Saint succeeded I extirpating idolatry from the diocese of Tours and the neighboring parts of Gaul. Although in staunch adherent of the Catholic Faith, he, as well as St. Ambrose, energetically protested against those who would put heretics to death.

The life of this great Saint was one of constant prayer. His virtues were also rewarded by an extraordinary gift of miracles. After a long life of more than eighty years, he died peacefully in the year 397.

PRAYER: God, Your Bishop St. Martin glorified You by both his life and his death. Renew in us Your grace, so that neither death nor life can separate us from Your love. Amen.
Saint of the Day
4. St. John Vianney
We Remember
August
Merciful Jesus, grant them eternal rest.
Mass Schedule:
7:30 AMMonday:
7:30 AMTuesday:
7:30 AMWednesday:
7:30 AMThursday:
7:30 AMFriday:
8:00 AMSaturday:
8:00 AMSunday:
8:00 AMHolidays:
Holy Hour - Adoration:
Thursday before First Friday: 7:00 - 8:00 PM