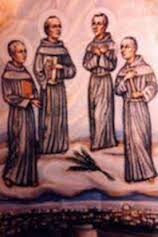 Nicholas Tavelic was born in Sibenik about the year 1340. He joined the Franciscans near Assisi in Italy and was active as a preacher in Bosnia for twenty years.

Nicholas was then sent to Palestine with three confreres, Adeodatus Aribert, Peter of Narbone, and Stephen of Cuneo. In 1391, they were arrested and imprisoned for having preached the Christian Faith publicly to Muslims.

The Saints drew up a Christian apologetic treatise and, after fortifying themselves with prayer, read their treatise before the Qadi of Jerusalem.

The Qadi asked them if they were willing to recant and become Muslims in order to escape death. They replied: “Under no circumstances will we recant. We are ready to die and to endure every torture because everything we said is holy, Catholic, and true.”

As a result, these holy confessors of the Faith were condemned to death, and their dismembered bodies were burned on November 14, 1391. They were canonized in 1970 by Pope Paul VI.

PRAYER: Almighty God, You glorified Sts. Nicholas and his Companions by their zeal in spreading the Faith and their crown of martyrdom. Through their prayers and example help us to run the way of Your commandments and teo receive the crown of eternal life. Amen.
Saint of the Day
4. St. John Vianney
We Remember
August
Merciful Jesus, grant them eternal rest.
Mass Schedule:
7:30 AMMonday:
7:30 AMTuesday:
7:30 AMWednesday:
7:30 AMThursday:
7:30 AMFriday:
8:00 AMSaturday:
8:00 AMSunday:
8:00 AMHolidays:
Holy Hour - Adoration:
Thursday before First Friday: 7:00 - 8:00 PM