15. St. Albert the Great, Bishop and Doctor of the Church

St. Albert the Great, Bishop and Doctor of the Church 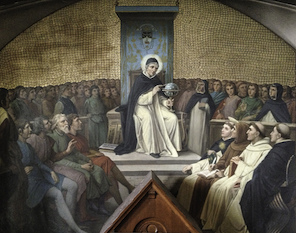 Patron of Scientists and Medical Technicians

Born in 1206, Germany, St. Albert the Great spent his youth under the spiritual tutelage of Blessed Jordan of Saxony, who inspired him to join the Order of Preachers. He studied and taught Philosophy at Cologne and Paris, where he became one of the most noted philosophers of his day. At Cologne he was famous as the teacher of St. Thomas Aquinas. Named to the Bishopric of Ratisbon, he retired to dedicate his talents to writing and teaching. He died in Poland in 1280.

St. Albert the Great was a man of immense knowledge and erudition. His works are voluminous in bulk and encyclopedic in scope: they include—besides biblical and theological works and sermons—treatises on Logic, Metaphysics, Ethics, and the Physics Sciences. His interests extended to Physics, Astronomy, Chemistry, and Biology, to human and animal Physiology, to Geography, Geology and Botany.

This “Universal Teacher” stands out for his recognition of the autonomy of human reasons in its own sphere and the validity of knowledge gained from sense-experience. Yet he never ceased to regard the Scriptures as the fount of human spirituality or true wisdom. He was beatified in 1622 by Pope Gregory XV and was equivalently canonized by being declared a Doctor of the Church in 1931 by Pope Pius XI.

PRAYER: God, You made St. Albert great by enabling him to combine human wisdom and Divine Faith. Help us to adhere to his teaching that we may progress in the science and at the same time come to a deeper understanding and love of You. Amen.
Saint of the Day
Blessed Sebastian of Aparicio, Religious
We Remember
February
Merciful Jesus, grant them eternal rest.
Mass Schedule:
7:30 AMMonday:
7:30 AMTuesday:
7:30 AMWednesday:
7:30 AMThursday:
7:30 AMFriday:
8:00 AMSaturday:
8:00 AMSunday:
8:00 AMHolidays:
Holy Hour - Adoration:
Thursday before First Friday: 7:00 - 8:00 PM