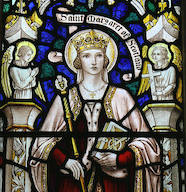 A grand-niece of Edward the Confessor, St. Margaret was born in 1045 in Hungary, the daughter of an exiled Scottish nobleman (King Edward the Exile) and a Hungarian princess. Brought by her father to Scotland, she became the Queen of Malcolm III, about 1070. She was devoted to the spiritual perfection of her eight children, practiced austere self-denial, and possessed unflagging love for the poor.

As Queen, Margaret used her influence in the interests of the Faith; she convoked a synod that drew up regulation for the Lenten fast, Easter Communion, and marriage laws. She founded several churches, and was constantly engaged in prayer and devout practices. After her death in 1093 she was continually venerated by the Scottish people, and in 1673 Pope Clement X proclaimed her Patroness of Scotland.

PRAYER: God, You endowed St. Margaret with a wonderful love for the poor. Through her intercession and example, make us so generous that all people may see in us the image of Your goodness. Amen.
Saint of the Day
4. St. John Vianney
We Remember
August
Merciful Jesus, grant them eternal rest.
Mass Schedule:
7:30 AMMonday:
7:30 AMTuesday:
7:30 AMWednesday:
7:30 AMThursday:
7:30 AMFriday:
8:00 AMSaturday:
8:00 AMSunday:
8:00 AMHolidays:
Holy Hour - Adoration:
Thursday before First Friday: 7:00 - 8:00 PM