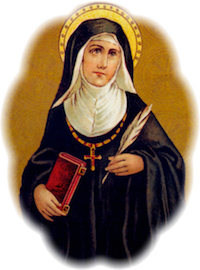 At the age of seven, St. Mechtilde was entrusted to the nuns of Rodalsdorf, who shortly afterward elected her elder sister Gertrude as their Abbess. Mechtilde herself became a nun, and mistress of the school when the house moved to Helfta.

In this capacity, it became Mechtilde’s lot to train a five-year-old who entered the monastery in 1261 and went on to become St. Gertrude the Great. The pupil wrote of her mistress: “There has never been anyone like her in our monastery, and I am afraid there will never be again.”

In collaboration with another nun St. Gertrude wrote an account of Mechtilde’s spiritual teaching and mystical experiences entitled The Book of Special Grace, which was made public after Mechtilde’s death on November 19, 1298.

PRAYER: God, You prepared a pleasing abode for Yourself in the heart of St. Mechtilde the Virgin. Through her intercession mercifully lighten the darkness of our heart so that we may rejoice in the knowledge that You are present and working within us. Amen.
Saint of the Day
4. St. John Vianney
We Remember
August
Merciful Jesus, grant them eternal rest.
Mass Schedule:
7:30 AMMonday:
7:30 AMTuesday:
7:30 AMWednesday:
7:30 AMThursday:
7:30 AMFriday:
8:00 AMSaturday:
8:00 AMSunday:
8:00 AMHolidays:
Holy Hour - Adoration:
Thursday before First Friday: 7:00 - 8:00 PM