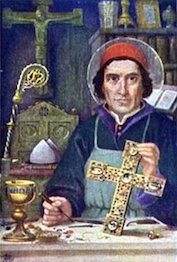 A Saxon by birth and an orphan at an early age, St. Bernward was brought up under the care of his uncle, Bishop Volkmar of Utrecht. Sent first to the Cathedral school of Heidelburg, he completed his studies at Mainz and was ordained a priest. After the death of his grandfather in 987, St. Bernward became an imperial chaplain and tutor of the child-emperor Otto III.

In 1003, the Saint was elected Bishop of Hildesheim and remained in that position for twenty years. He built the church and monastery dedicated to St. Michael and administered his diocese with the utmost wisdom and understanding. He also dabbled in ecclesiastical art and he is especially remembered in connection with metalwork of every kind. He himself spent much time plying the arts of painting and metalworking, and several very beautiful pieces of work at Hildesheim are attributed directly to him.

In an ecclesiastical dispute with St. Willigis, Archbishop of mainz, Berward conducted himself in a manner beyond reproach and lived to see his opponent publicly submit to the Holy See’s decision in favor of the Bishop of Hildesheim. He died on November 20, 1022, and was canonized in 1193 by Pope Celestine III.

PRAYER: God, Light and Shepherd of souls, You established St. Bernward as Bishop in Your Church to feed Your flock by his word and form it by his example. Help us through his intercession to keep the Faith he taught by his word and follow the way he showed by his example. Amen.
Saint of the Day
4. St. John Vianney
We Remember
August
Merciful Jesus, grant them eternal rest.
Mass Schedule:
7:30 AMMonday:
7:30 AMTuesday:
7:30 AMWednesday:
7:30 AMThursday:
7:30 AMFriday:
8:00 AMSaturday:
8:00 AMSunday:
8:00 AMHolidays:
Holy Hour - Adoration:
Thursday before First Friday: 7:00 - 8:00 PM