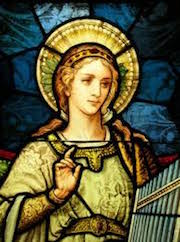 Patroness of Musicians, Poets, and Singers

According to her legendary Acts, Cecilia was a native of Rome. At an early age she made a vow of virginity, but her parents forced her to marry a nobleman named Valerian. She converted him to the Faith of Christ, and, by the Providence of God, preserved her virginity. She also converted Tiburtius, the brother of Valerian.

Both these men suffered martyrdom for the Faith, and Dt. Cecilia died the same glorious death a few days after. Their death occurred probably in the reign of Marcus Aurelius or of Commodus, between the years 161 and 192.

The name of St. Cecilia has always been most illustrious on the Church, and since the primitive ages it has been mentioned in the Canon of the Mass (First Eucharistic Prayer). She is honored as the Patroness of ecclesiastical music.