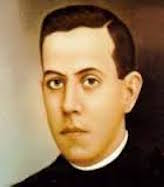 Miguel Pro was born near Zacatecas, Mexico, on January 13, 1891. In 1911, he entered the Society of Jesus; his studies took him to the United States, Spain, and Belgium, where he was ordained in 1926.

On his return to Mexico, he carried out his priestly ministry in secret because of the religious persecution. Eventually, his zeal attracted the attention of the authorities; he was arrested on false charges and was condemned to death.

PRAYER: Lord, You gave Blessed Miguel the grace to seek Your glory and the salvation of souls. Through his prayers, may we serve and glorify You by faithfully performing our daily duties and helping our neighbors. Amen.
Saint of the Day
4. St. John Vianney
We Remember
August
Merciful Jesus, grant them eternal rest.
Mass Schedule:
7:30 AMMonday:
7:30 AMTuesday:
7:30 AMWednesday:
7:30 AMThursday:
7:30 AMFriday:
8:00 AMSaturday:
8:00 AMSunday:
8:00 AMHolidays:
Holy Hour - Adoration:
Thursday before First Friday: 7:00 - 8:00 PM