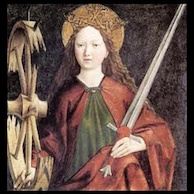 Patroness of Jurists, Philosophers, and Preachers

St. Catherine is believed to have been born in Alexandria, Egypt, early in the 4th century. It appears that this holy virgin was most distinguished by the nobility of her birth as well as by her beauty, wealth, and learning.

Following her conversion at the age of eighteen through a vision of Mary and her holy Child, Catherine preached the Gospel throughout Alexandria. She also denounced the Emperor Maxentius for persecuting Christians. Fifty of her converts were then burned to death.

Maxentius offered Catherine a royal marriage if she would deny the Faith. Regarding herself as a bride of Christ, she refused and landed in prison. While in prison and while Maxentius was away, Catherine converted Maxentius’ wife and two hundred of his soldiers. He had them all put to death.

Catherine was likewise condemned to death. She was put on a spiked wheel, and when the wheel broke, she was beheaded. During the Middle Ages she was regarded as one of the Fourteen Holy Helpers, and she was one of the voices heard by St. Joan of Arc.

PRAYER: Almighty and eternal God, You endowed Your people with St. Catherine, Your Virgin and invincible Martyr. Grant that by her intercession we may be strengthen with Faith and constancy and labor with great effort for the unity of the Church. Amen.
Saint of the Day
8. Immaculate Conception of the Blessed Virgin Mary
We Remember
December
Merciful Jesus, grant them eternal rest.
Mass Schedule:
7:30 AMMonday:
7:30 AMTuesday:
7:30 AMWednesday:
7:30 AMThursday:
7:30 AMFriday:
8:00 AMSaturday:
8:00 AMSunday:
8:00 AMHolidays:
Holy Hour - Adoration:
Thursday before First Friday: 7:00 - 8:00 PM