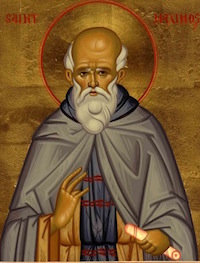 St. Maximus was born in Provence, France. From his earliest years he gave evidence of more than ordinary virtue. After living a saintly life in the world for some years, he finally retired to the famous monastery of Lerins, where he was kindly received by St. Honoratus, by whom it was governed. When the latter had become archbishop of Arles in 426, St. Maximus was chosen second Abbot of Lerins.

Maximus’s reputed sanctity drew crowds to the island, and the monastery prospered under his benevolent administration. He had governed it about seven years when the See of Riez in Provence became vacant. Finding that he was wanted to fill it, he fled to the coast of Italy; but je was overtaken, brought back, and forced to accept the new dignity. In this position, he continued to wear a hair shirt and to observe the monastic rule insofar as his duties allowed.