St. James of the March, Priest 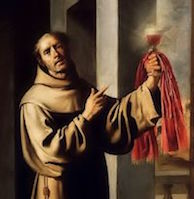 James Gangala was born in 1391 in the March of Ancona, Italy, and was therefore surnamed “of the March.” Though of humble origin he was able to attend the University of Perugia and won the laurels of Doctor of Laws. However, after a short stint at teaching, he renounced the world to become a Franciscan friar. He was ordained and for fifty years preached the Faith to thousands in season and out of season. Together with St. John of Capistrano he fought strenuously against the rigorist and heretical sects known as the Fraticelli, and helped reconcile the moderate Hussites to the Church at the Council of Basle.

Everywhere he went James stood as a luminous figure of sanctity and the Franciscan apostolate. Such was the power of his preaching that he is said to have converted fifty thousand heretics and countless sinners, including thirty-six harlots through a single sermon on St. Mary Magdalene. He traveled all over Europe as the ambassador of Popes and rules, sleeping little and praying much.

The Saint’s love for the poor led him to establish pawnshops where they might borrow money at low rates, a work that was made very popular by his protégé, St. Bernardine of Feltre. After a vigorous life schedule, rigorous penances, and never-ending activity, St. James died on November 28, 1476, and was canonized in 1726 by Pope Benedict XIII.

PRAYER: God, You made St. James an illustrious preacher of the Gospel to save souls and to bring back sinners from the mire od sin to the pathway of virtue. Through his intercession may we be cleansed from all sin and obtain eternal life. Amen.
Saint of the Day
4. St. John Vianney
We Remember
August
Merciful Jesus, grant them eternal rest.
Mass Schedule:
7:30 AMMonday:
7:30 AMTuesday:
7:30 AMWednesday:
7:30 AMThursday:
7:30 AMFriday:
8:00 AMSaturday:
8:00 AMSunday:
8:00 AMHolidays:
Holy Hour - Adoration:
Thursday before First Friday: 7:00 - 8:00 PM