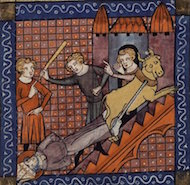 The life of St. Saturninus is shrouded in mystery. However, a late tradition says that he was sent from Rome to Gaul by Pope Fabian, about the year 245, to preach the Faith to the people of that country. In the year 250, during the consulate of Decius and Gratus, he fixed his See at Toulouse, and converted a number of idolators by his preaching and miracles.

One day, as Saturninus was passing the principal temple in the city, the priest seized him and dragged him into it, declaring that he should either appease the offended deities by offering sacrifices to them or die. On his positive refusal, they abused him and finally tied his feet to wild bull that had been brought there for sacrifice.
They then drove the beast from the temple and the Martyr was dragged after it. He soon expired, but his body was literally torn to pieces.

PRAYER: God, You gave splendor to Your Church by granting St. Saturninus the victory of martyrdom. Grant that, as he imitated the Lord’s Passion, so we may follow in his footsteps and attain everlasting joys. Amen.
Saint of the Day
The Conversion of St. Paul, Apostle
We Remember
January
Merciful Jesus, grant them eternal rest.
Mass Schedule:
7:30 AMMonday:
7:30 AMTuesday:
7:30 AMWednesday:
7:30 AMThursday:
7:30 AMFriday:
8:00 AMSaturday:
8:00 AMSunday:
8:00 AMHolidays:
Holy Hour - Adoration:
Thursday before First Friday: 7:00 - 8:00 PM