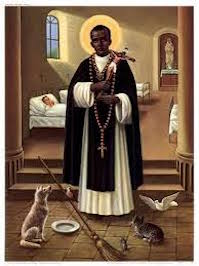 Patron of Hairdressers and Race Relations

St. Martin de Porres was born at Lima, Peru, in 1579. His father was a Spanish gentleman and his mother an Indian woman from Panama. At fifteen, he became a laybrother at the Dominican Friary at Lima and spent his whole life there—as a barber, farm-laborer, almoner, and infirmarian among other things.

Martin had a great desire to go off to some foreign mission and thus earn the palm of martyrdom. However, since this was not possible, he made a martyr out of his body, devoting himself to ceaseless and severe penances. In turn, God endowed him with many graces and wondrous gifts, such as aerial flights and bilocation.

St. Martin’s love was all-embracing, shown equally to humans and animals, including vermin. He also possessed spiritual wisdom, solving his sister’s marriage problems, raising a dowry for his niece inside of three days’ time, and resolving theological problems for the learned of his Order and for Bishop.

PRAYER: God, You led St. Martin by the way of humility to heavenly glory. Help us to follow the example of his holiness and so become worthy to be exalted with him in heaven. Amen.
Saint of the Day
4. St. John Vianney
We Remember
August
Merciful Jesus, grant them eternal rest.
Mass Schedule:
7:30 AMMonday:
7:30 AMTuesday:
7:30 AMWednesday:
7:30 AMThursday:
7:30 AMFriday:
8:00 AMSaturday:
8:00 AMSunday:
8:00 AMHolidays:
Holy Hour - Adoration:
Thursday before First Friday: 7:00 - 8:00 PM