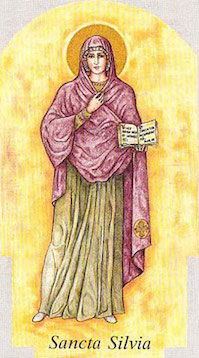 The Church venerates the sanctity of Sylvia and Gordian, the parents of St. Gregory the Great, as well as his two ants, Tarsilla and Emiliana. St. Sylvia was a native of Sicily while St. Gordian, her husband, came from the vicinity of Rome. They had two sons: Gregory and another whose name has not survived the ages.

Gordian died about 573, and Gregory converted his paternal home into a monastery. Sylvia therefore retired to solitary and quasi-monastic life in a little abode near the Church of St. Saba on the Aventine. It became her custom frequently to send fresh vegetables to her son on a silver platter. One day, when Gregory found himself with nothing to give a poor beggar, he presented him with the platter.

St. Sylvia is thought to have gone on to her heavenly reward about the year 592. After her death, the holy Pontiff had a picture of both his parents depicted in the Church of St. Andrew. In the 16th century, Pope Clement VIII had St. Sylvia inscribed in the Roman Martyrology.

PRAYER: God, You gladden us each year by the feast of St. Sylvia. Grant that as we honor her in such festivities we may also imitate her example in our conduct. Amen.
Saint of the Day
4. St. John Vianney
We Remember
August
Merciful Jesus, grant them eternal rest.
Mass Schedule:
7:30 AMMonday:
7:30 AMTuesday:
7:30 AMWednesday:
7:30 AMThursday:
7:30 AMFriday:
8:00 AMSaturday:
8:00 AMSunday:
8:00 AMHolidays:
Holy Hour - Adoration:
Thursday before First Friday: 7:00 - 8:00 PM