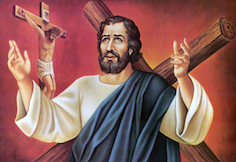 St. Andrew, the brother of St. Peter, was a native of the town of Bethsaida in Galilee, and a fisherman by profession. Being first a disciple of St. John the Baptist, he later joined Jesus, and also brought to Him his brother Peter, with whom he became a member of the Apostolic College. After the dispersion of the Apostle, St. Andrew preached the Gospel in Scythia, as we learn from Origen; and as Sophronius says, also in Sogdiana and Colchis.

According to Theodoret, St. Gregory Nazianzen, and St. Jerome, Andrew also labored in Greece. It is even believed that he carried the Gospel as far as Russia and Poland, and that he preached at Byzantium. He suffered martyrdom at Patras in Achaia, and, according to ancient authorities, by crucifixion on a cross in the form of an X.

PRAYER: Lord, You raised up St. Andrew, Your Apostle, to preach and rule in Your Church. Grant that we may always experience the benefit of his intercession with You. Amen.
Saint of the Day
4. St. John Vianney
We Remember
August
Merciful Jesus, grant them eternal rest.
Mass Schedule:
7:30 AMMonday:
7:30 AMTuesday:
7:30 AMWednesday:
7:30 AMThursday:
7:30 AMFriday:
8:00 AMSaturday:
8:00 AMSunday:
8:00 AMHolidays:
Holy Hour - Adoration:
Thursday before First Friday: 7:00 - 8:00 PM