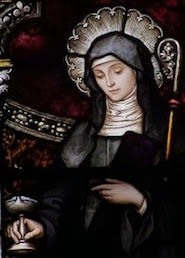 St. Bertille was born in the territory of Soissons, France, during the reign of Dagobert I. She embraced the religious state in 630, in a monastery of nuns at Jouarre, about twelve miles from Meaux. In this abode of virtue her prudence appeared so perfect that thought she was still young, the care of entertaining strangers, and the charge of the sick and of the children that were educated in the monastery, were successively committed to her. She gave such satisfaction in these various offices that she was chosen Prioress, to assist the Abbes in her administration.
The Saint’s example had the most salutary influence upon the entire community. St. Bathildis, wife of Clovis II, having had originally established, desired the Abbess of Jouarre to send over a small colony to lead the novices in the practice of monastic perfection. St. Bertille was chosen to lead the colony, and she became the first Abbess of Chelles, about the year 646.

St. Bertille’s reputation for sanctity and the discipline of her monastery drew to it several princesses, among whom was Hereswith, Queen of the East Angeles, who had been the wife of the good King Annas. Queen Bathildis herself took the monastic habit in this house in 665, so that St. Bertille became the superior of two Queens.

Yet, the Abbess seemed the most humble of all her Sisters. She governed her monastery for forty-six years, increasing daily in virtue, and in her old age redoubling rather that diminishing her fervor. Her happy death occurred about the year 705.