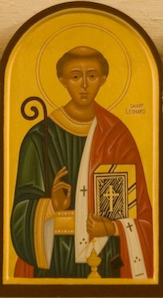 St. Leonard was born in Gaul of a noble Frankish family in the 6th century. He was converted by St. Remigius and entered the monastery of Micy, near Orleans.

Leonard declined to accept a bishopric offered him by his godfather, King Clovis, and became a hermit for Christ. On a plot of land given him by the King, he built an oratory, which went on to become the Abbey of Noblac.

The Saint preached the Gospel to the surrounding peoples and became venerated for his holiness, miracles, and work with prisoners. He endeavored to bring malefactors and prisoners to a sincere spirit of compunction and penance and a perfect reformation of their lives.

St. Leonard’s labors were crowed with a happy death the year 559. His cult took root in the 11th century and made him one of the most popular Saints in the Middle ages in Europe.

PRAYER: Lord God, You alone are holy and no one is good without You. Through the intercession of St. Leonard help us to live in such a way that we might be deprived of a share in Your glory. Amen.
Saint of the Day
4. St. John Vianney
We Remember
August
Merciful Jesus, grant them eternal rest.
Mass Schedule:
7:30 AMMonday:
7:30 AMTuesday:
7:30 AMWednesday:
7:30 AMThursday:
7:30 AMFriday:
8:00 AMSaturday:
8:00 AMSunday:
8:00 AMHolidays:
Holy Hour - Adoration:
Thursday before First Friday: 7:00 - 8:00 PM