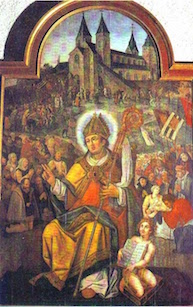 St. Willibrord was native of Northumberland, where he was born about 658. At the age of seven he was placed by his parents in the monastery of Ripon, under the care of St. Wilfrid.

Willibrord made his monastic profession when very young. Then at the age of twenty he went to Ireland and spent years in the study of the sacred sciences. At the age thirty he was ordained and together with St. Swidbert and ten other English monks traveled to Friesland, where St. Wilfrid had sown the seeds of the Faith in 678.

Pope Sergius consecrated Willibrord in St. Peter’s Church, made him an Archbishop, and authorized him to fix his See in whatever part of the country he should deem most convenient.

On returning to his flock, the Saint chose the city of Utrecht for his residence. In 698, he founded the Abbey of Echternach (in modern Luxemburg), and governed it until his death, which probably occurred in 739.

PRAYER: God, You built up Your Church by means of the religious zeal and apostolic care of St. Willibrord. Grant by his intercession that she may ever experience a new increase of Faith and holiness. Amen.
Saint of the Day
4. St. John Vianney
We Remember
August
Merciful Jesus, grant them eternal rest.
Mass Schedule:
7:30 AMMonday:
7:30 AMTuesday:
7:30 AMWednesday:
7:30 AMThursday:
7:30 AMFriday:
8:00 AMSaturday:
8:00 AMSunday:
8:00 AMHolidays:
Holy Hour - Adoration:
Thursday before First Friday: 7:00 - 8:00 PM