1. St. Therese of the Child Jesus, Virgin and Doctor of the Church

St. Therese of the Child Jesus, Virgin and Doctor of the Church 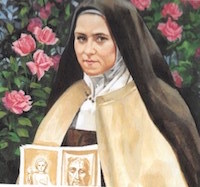 Patroness of Aviators, Florists and the Missions

Born at Alencon in Normandy, France in 1873, Marie Frances Therese Martin entered the Carmel of Lisieux in 1889, at the age of fifteen years, and on September 30, 1897, she winged her flight to heaven, she was canonized in 1925 by Pope Pius XI, and made the third woman Doctor of the Church in 1997 by Pope John Paul II.

The story of those nine years is faithfully told in the Autobiography which Therese wrote under obedience. Every line is marked by the artless simplicity of a literary genius, so that even when translated from its musical euphonious French into mechanical, clanking English, it still reads with rhythm of a prose poem.

Therese took for her motto the well-known words of the great Carmelite mystic St. John of the Cross: “love is repaid by love alone.” With these thoughts ever present in her mind, her heart found courage to endure hours and days of bitterness that few Saints have been privileged to undergo. She understood deeply the meaning of those mysterious words of St. Paul: ”Far be it from me to glory save in the Cross of my Lord Jesus Christ, by which I am crucified to the world and the world is crucified to me. I fill up those things are wanting in the sufferings of Christ for His members” (Gal 6:14).

Love of God as a Father, expressed in childlike simplicity and trust, and a deep understanding of the mystery of the Cross were the basic principles of the Saint’s little way.

There is just one other doctrine that needs to be mentioned to complete the picture of her soul’s surrender—her vivid realization of the spiritual Motherhood of Mary, the Mother of God, and heaven’s Queen, and our own loving Mother. She had learned the meaning of the strong phrase of St. Augustine, written fifteen hundred years ago, that we were all begotten with Jesus in the womb of Mary as our Mother.

The Little Flower is a faithful inheritor of all the loving tradition of the greatest Saints and Doctors of the Church in honoring Mary Immaculate. It is doubtful if that harpist of Mary, St. Bernard, could compose anything more beautiful, tender, and theological than the very last poem St. Theresa wrote, entitled, Why I Love You, Mary, and written almost when the agony of death was upon her. In it she sings:

PRAYER: God our Father, You destined Your Kingdom for Your children who are humble. Help us to imitate the way of St. Therese, so that, by her intercession, we may attain the eternal glory that You promised. Amen.
Saint of the Day
The Conversion of St. Paul, Apostle
We Remember
January
Merciful Jesus, grant them eternal rest.
Mass Schedule:
7:30 AMMonday:
7:30 AMTuesday:
7:30 AMWednesday:
7:30 AMThursday:
7:30 AMFriday:
8:00 AMSaturday:
8:00 AMSunday:
8:00 AMHolidays:
Holy Hour - Adoration:
Thursday before First Friday: 7:00 - 8:00 PM