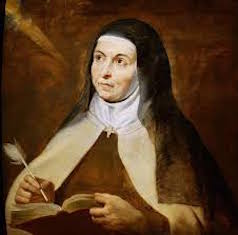 Patroness for Headache-Suffers, Patroness of the Congregation of the Sisters of the Divine Redeemer

St. Teresa was born on March 28, 1515, in Avila, Spain. Her mother died when she was twelve, and her father placed her in a convent of Augustinian nuns. When she returned home, she determined to enter religion. She entered the Carmelite Convent of the Incarnation, near Avila, and made her profession in November 1534.

Though for many years in the convent she led a good religious life, certain faults still adhered to her; but the moment of grace came at last and the noble heart of St. Teresa began to soar upward to perfection. Inspired by the Holy Spirit and acting under the direction of enlightened men, among whom was St. Peter of Alcantara, she undertook the superhuman task of reforming her Order and restoring its primitive observance.

Assisted by St. John of the Cross, St. Teresa succeeded in establishing the Reform of the Discalced Carmelites, for both the brethren and the sisters of her Order. Before her death in 1582, thirty-two monasteries of the Reformed Rule had been established, among which seventeen were convents of nuns. She was canonized in 1622 by Pope Gregory XV.

St. Teresa received great gifts from God. She also wrote many books on Mystical Theology considered by Popes Gregory XV and Urban VII to be equal to those of a Doctor of the Church. Accordingly, on September 27, 1970, Pope Paul VI added her to the roll of the Doctors of the Church.

PRAYER: God, You raised up St. Teresa by Your Spirit so that she could manifest to the Church the way to perfection. Nourish us with the food of heaven, and fire us, like her, with a desire for holiness. Amen.
Saint of the Day
The Conversion of St. Paul, Apostle
We Remember
January
Merciful Jesus, grant them eternal rest.
Mass Schedule:
7:30 AMMonday:
7:30 AMTuesday:
7:30 AMWednesday:
7:30 AMThursday:
7:30 AMFriday:
8:00 AMSaturday:
8:00 AMSunday:
8:00 AMHolidays:
Holy Hour - Adoration:
Thursday before First Friday: 7:00 - 8:00 PM