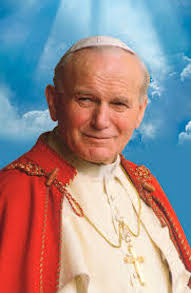 Born in Wadowice, Poland, on May 18, 1920, Karol Jozef Wojtyla had lost his mother, father and older brother before his 21st birthday. Karol’s promising academic career at Krakow’s Jagiellonian University was cut short by the outbreak of World War II. While working in a quarry and a chemical factory, he enrolled in an “underground” seminary in Kraków. Ordained in 1946, he was immediately sent to Rome where he earned a doctorate in theology.

Back in Poland, a short assignment as assistant pastor in a rural parish preceded his very fruitful chaplaincy for university students. Soon he earned a doctorate in philosophy and began teaching that subject at Poland’s University of Lublin.

Communist officials allowed him to be appointed auxiliary bishop of Kraków in 1958. He attended all four sessions of Vatican II. Appointed as archbishop of Kraków in 1964, he was named a cardinal three years later. Elected pope in October 1978, he took the name John Paul II. He was the first non-Italian pope in 455 years.

John Paul II became a spiritual protagonist in two global transitions: the fall of European communism, which began in his native Poland in 1989, and the passage to the third millennium of Christianity. He also instituted the annual February 2 “World Day of Consecrated Life”, the February 11 “World Day of the Sick” and a World Meeting of Families every three years. Welcoming hundreds of thousands of young people to the Vatican for a special Palm Sunday celebration in 1984, has become the “World Youth Day”. He promoted ecumenical and interfaith initiatives, especially the 1986 “Day of Prayer for World Peace” in Assisi.

On May 13, 1981 he was shot and severely wounded. In 1983 he visited Mehmet Ali Agca, who had attempted to assassinate him, in prison.

In his 27 years of papal ministry, John Paul II wrote 14 encyclicals and five books. In the last years of his life, he suffered from Parkinson’s disease and was forced to cut back on some of his activities. He died on April 2, 2005, the vigil of Divine Mercy Sunday. Pope Benedict XVI beatified John Paul II in 2011, and Pope Francis canonized him on April 27, 2014.

PRAYER: Almighty and eternal God, who in the Pope St. John Paul II, gave to the whole world the shining example of a good shepherd, grant that, through his intercession, we may with joy spread abroad the fullness of Christian charity. Through Jesus Christ, our Lord. Amen.