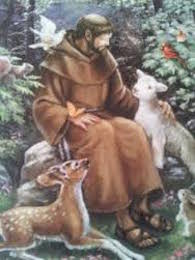 Patron of Catholic, Ecologists, and Merchants

Francis Bernardone, the founder of the three Franciscan Orders, was born at Assisi, Italy, in 1181. His father was a wealthy merchant of the town. During a year’s imprisonment at Perugia due to his participation as a knight in an unsuccessful campaign against that town, and again during a prolonged severe illness, Francis became aware of a vocation to a life of extraordinary service to the Church of Christ.

Inspired at the age of twenty-five by the Scripture passage of Matthew commanding the disciples to evangelize the world without possessions, Francis abandoned his affluent way of life and began to live a life of radical poverty. Disinherited by his father, Francis went away penniless “to wed Lady Poverty” and to live a life that was poorer than the poor whom he served. His example soon drew followers to his way of life.

Three years later, in 1210, when his companions numbered twelve, Francis sought and received approval of Pope Innocent III to lead a life according to the Rule of the Holy Gospel, and they became a band of roving preachers of Christ in simplicity and lowliness. Thus began the “Friars Minor,” or “Lesser Brothers”. Up and down the extent of Italy the brothers summoned the people to faith and penitence; they refused even corporate ownership of property, human learning, and ecclesiastical preferment. St. Francis himself, out of humility, never became a priest, and at first only some of his band were in Holy Orders.

Francis’ practice of evangelical poverty and devotion to the humanity of Christ warmed the hearts of a “world growing cold,” and soon a vast Franciscan movement was sweeping through Europe. By 1219, over five thousand Franciscans gathered at Assisi for the famed Chapter of Mats. To accommodate this religious revival, Francis founded a Second Order through St. Clare of Assisi for cloistered nuns and a Third Order for religious and laity of both sexes.

Francis’ devotion to the Passion of Christ prompted him to make a missionary journey to the Holy Land. Worn out by his tremendous apostolic efforts, pained by the Stigmata he had received in 1224, and blinded by eye disease, Francis died at sunset, October 3, 1226, while singing the eight verse of Psalm 142: “Lead me forth from prison that I may give thanks to Your Name.” He was canonized two years later by Pope Gregory IX.

Francis of Assisi has captured the heart and imagination of people of all religious persuasions by his love for God and neighbor, as well as all God’s creatures, by his simplicity, directness, and single-mindedness, and by the lyrical aspect of his multifaceted life. However, he was far more that an inspired individualist. He was a man possessed of vast spiritual insight and power; a men whose all-consuming love for Christ and redeemed creation burst forth in everything he said and did.

PRAYER: God, You enabled St. Francis to imitate Christ by his poverty and humility. Walking in St. Francis’ footsteps, may we follow Your Son and be bound to You by a joyful love. Amen.
Saint of the Day
The Conversion of St. Paul, Apostle
We Remember
January
Merciful Jesus, grant them eternal rest.
Mass Schedule:
7:30 AMMonday:
7:30 AMTuesday:
7:30 AMWednesday:
7:30 AMThursday:
7:30 AMFriday:
8:00 AMSaturday:
8:00 AMSunday:
8:00 AMHolidays:
Holy Hour - Adoration:
Thursday before First Friday: 7:00 - 8:00 PM