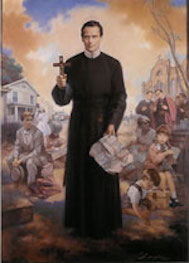 Francis Xavier Seelos was born in Fussen, Germany, in 1819. Expressing his desire for the priesthood since an early age, he entered the diocesan seminary of Augsburg after completing his studies in philosophy.

Upon learning of the charism and missionary activity of the Congregation of the Most Holy Redeemer, Francis went to North America in 1843. There he entered the Redemptorist novitiate. After completion his theological studies, being ordained a priest in 1844.

He began his pastoral ministry in Pittsburgh, Pennsylvania, where he remained nine years, working closely as assistant pastor of his confrere St. John Neumann, while at the same time serving as Master of Novices and dedicating himself to mission preaching.

In 1854, he returned to Baltimore, later being transferred to Cumberland and then Annapolis, where he served in parochial ministry and in the formation of the Redemptorist seminarians. He was considered an expert confessor, a watchful and prudent spiritual director and a pastor always joyfully available and attentive to the needs of the poor and the abandoned.

In 1860, he was a candidate for the office of Bishop of Pittsburgh. Having been excused from this responsibility by Pope Pius IX, he became a full-time itinerant missionary preacher. He died of the yellow fever epidemic caring for the sick and the poor of New Orleans on October 4, 1867. He was beatified in 2000 by Pope John Paul II.

PRAYER: O God, who made your Priest Blessed Francis Xavier Seelos outstanding in love, that he might proclaim the mysteries of redemption and comfort those in affliction, grant, by his intercession, that we may work zealously for your glory and for the salvation of mankind. Amen.
Saint of the Day
The Conversion of St. Paul, Apostle
We Remember
January
Merciful Jesus, grant them eternal rest.
Mass Schedule:
7:30 AMMonday:
7:30 AMTuesday:
7:30 AMWednesday:
7:30 AMThursday:
7:30 AMFriday:
8:00 AMSaturday:
8:00 AMSunday:
8:00 AMHolidays:
Holy Hour - Adoration:
Thursday before First Friday: 7:00 - 8:00 PM