14. Exaltation of the Holy Cross

Exaltation of the Holy Cross 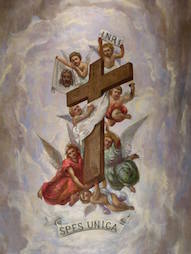 When the Sacred Body of Jesus was taken down from the Cross and carried to the grave on Calvary, the Cross on which He died was thrown into a ditch or well, and covered over with stones and earth, so that the followers of the Crucified Redeemer might not find it. Almost three hundred years later (312 A.D.), Constantine the Great, not yet a Christian, while battling with Maxentius for the throne of the Roman Empire, prayed to the God of the Christians to aid him in his struggle.

In answer to Constantine’s prayer, a luminous cross of monogram of Christ appeared in the heavens bearing the inscription: “In This Sign You Will Conquer.” In gratitude for victory, under this banner, over Maxentius at the Milvian Bridge, on October 28, 312, Constantine had the Sign of Christianity placed on the Roman standard and on the shields of his soldiers. Then came the finding of the True Cross at Jerusalem by St. Helena in 326, commemorated by a feast on May 3.

In the year 614, Chosroes II, King of Persia, invaded Syria and Palestine; he took and sacked Jerusalem, carrying off with other treasures the great relic of the True Cross. The Emperor Heraclius of Constantinople, at the head of a large army, invaded Persia, and forced the Persians to sue for peace and to restore the Sacred Cross, which Heraclius piously brought back to Jerusalem in 629. When he reached the city gate on the way that led to Calvary, the Emperor laid aside every robe and mark of royalty, and clothed in sackcloth of penance and barefoot, carried the Cross up the ascent of Calvary and restored it to its place in the Church of the Holy Sepulcher. This event is commemorated by the Church on September 14, in the feast of the Exaltation of the Holy Cross.

PRAYER: God, You willed that Your only Son should undergo crucifixion to bring about the salvation of the human race. Grant that we who have known His mystery on earth may deserve to reap the rewords of His redemption in heaven. Amen.
Saint of the Day
St. Marcellus I, Pope
We Remember
January
Merciful Jesus, grant them eternal rest.
Mass Schedule:
7:30 AMMonday:
7:30 AMTuesday:
7:30 AMWednesday:
7:30 AMThursday:
7:30 AMFriday:
8:00 AMSaturday:
8:00 AMSunday:
8:00 AMHolidays:
Holy Hour - Adoration:
Thursday before First Friday: 7:00 - 8:00 PM