3. St. Gregory the Great, Pope and Doctor of the Church

St. Gregory the Great, Pope and Doctor of the Church 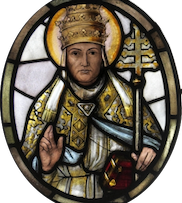 Patron of Musicians and of Teachers

St. Gregory, born at Rome about the year 540, was the son of Gordianus, a wealthy senator, who later renounced the world and became one of the seven deacons of Rome. After Gregory had acquired the usual thorough education, Emperor Justin the Younger appointed him, in 574, Chief Magistrate of Rome, though he was only thirty-four years of age.

After the death of his father Gregory built six monasteries in Sicily and founded a seventh in his own house in Rome, which became the Benedictine Monastery of St. Andrew. Here he himself assumed the monastic habit in 575, at the age of thirty-five.

After the death of Pelagius, St. Gregory was chosen Pope by the unanimous consent of priests and people. Now began those labors which have merited for him the title of Great. His zeal extended over the entire known world, he was in contact with all the Churches of Christendom, and, in spite of his bodily sufferings and innumerable labors, he found time to compose a great number of works. Known above all for his magnificent contributions to the Liturgy of the Mass and Office, he is one of the four great Doctors of the Latin Church. He died March 12, 604.

PRAYER: God, You look upon Your people with compassion and rule them with love. Through the intercession of Pope St. Gregory, fill us with the Spirit of wisdom so that Your people may grow in holiness and that both pastors and flock may obtain eternal joy. Amen.
Saint of the Day
St. Marcellus I, Pope
We Remember
January
Merciful Jesus, grant them eternal rest.
Mass Schedule:
7:30 AMMonday:
7:30 AMTuesday:
7:30 AMWednesday:
7:30 AMThursday:
7:30 AMFriday:
8:00 AMSaturday:
8:00 AMSunday:
8:00 AMHolidays:
Holy Hour - Adoration:
Thursday before First Friday: 7:00 - 8:00 PM