8. The Nativity of Mary

The Nativity of Mary 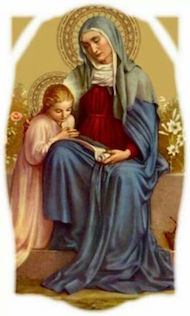 More than nineteen hundred years ago there dwelt in the little Galilean village of Nazareth a holy couple of the royal race of David, whose names were Joachim and Anne. They were already far advanced in years, and had almost ceased to hope that God would bless them with a child, when the long-felt desire of their hearts was gratified by the birth of a daughter, who would be forever blessed among women and make the names of Joachim and Anne known and honored through all future ages.

This child was called Mary, the chosen one of Adam’s race, destined to be the Mother of Jesus Christ, Who became he Child, to redeem and save the world.

The Feast of September 8 in honor of the Blessed Virgin Mary originated at Jerusalem, as did the Solemnity of August 15. It is a case of the Feast of the Basilica known at the end of the 15th century as the Basilica “of holy Mary where she was born”, and now known as the Basilica of St. Anne.

On this feast the Church unites in spirit with the Patriarchs and Prophets of the Old Law, with all who during long centuries of expectation watched and prayed for the coming of the Jus One, Whose advent and work of redemption had their beginning in the birth of His Immaculate Mother.

PRAYER: God, give Your servant heavenly grace, so that as the birth of the Blessed Virgin marked the beginning of salvation, this feast of he Nativity may serve to obtain peace for the world. Amen.
Saint of the Day
St. Marcellus I, Pope
We Remember
January
Merciful Jesus, grant them eternal rest.
Mass Schedule:
7:30 AMMonday:
7:30 AMTuesday:
7:30 AMWednesday:
7:30 AMThursday:
7:30 AMFriday:
8:00 AMSaturday:
8:00 AMSunday:
8:00 AMHolidays:
Holy Hour - Adoration:
Thursday before First Friday: 7:00 - 8:00 PM