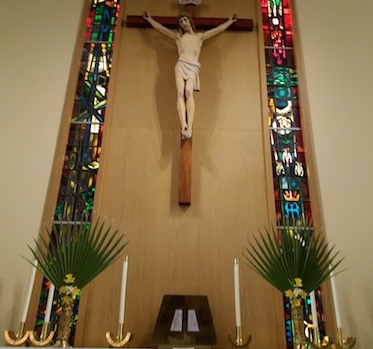 Holy Week begins with a Sunday, called Palm Sunday. Jesus sitting on the colt triumphantly enters into Jerusalem while the people are shouting, “Hosanna! Blessed is He who comes in the name of the Lord! Blessed is the kingdom of our father David that is to come! Hosanna in the highest!” (Mk 11:10) The people also spread their cloaks and leafy branches on the road.

Today, we use palms or other branches to solemnly enter the Church while we follow Jesus’ entrance to Jerusalem. We do not spread any cloaks because it would be strange, but we could spread our hearts before Jesus while we are singing, “Hosanna, Son of David!

Today, Jesus starts His transition from the earthly triumph in Jerusalem through His rejection by the people, the victory of His enemies over Him, and His suffering, His public condemnation, His crucifixion between criminals, the rejection of His work, all the way to His grave. And then it involves - against the will of many and beyond all expectations - final victory over sin, death and the underworld. Jesus' suffering ends in everlasting joy and His death ends with the beginning of a new life.

Mother Alphonse Marie meditated over and over on the events that took place in Jerusalem - of Jesus' suffering, death and resurrection. These events filled her internally and accompanied her throughout her personal life.

Follow Jesus with joy and exaltation saying, “You are my King, my Lord, my possession. I believe that You are the Anointed One, sent by the Father.” Be joyful, even though some trials you may experience be the beginning of a triumphal entrance into heavenly banquet.