The Ragman: The Redeeming Christ

The theme of the Associate meeting on September 30, 2018 was "Redeeming Love" as seen in the Old and New Testament. A look at the life of Blessed Alphonse Marie clearly showed how she put "Redeeming love" into action, into everyday life in reaching out and touching the lives of the "needy". 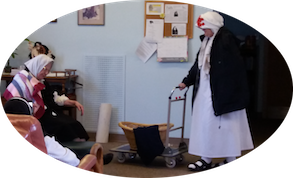 The presentation ended with the enactment of "The Ragman". The ragman of the inner city was calling out asking for rags in exchange for clean clothing. He first encountered a sobbing young woman and gently replaced her wet, soiled handkerchief with a clean white cloth and left her with a smile while he took upon her tears. Next, he encountered a bleeding woman stunned with pain and carefully removed her bloody bandage and wrapped her head with a pure white scarf. The ragman was now sobbing and bleeding because he had taken upon himself the suffering of these two persons. Moving on, he met a young man with one arm who had no job. Quickly, the ragman exchanged jackets and behold the young man now had two healthy arms and the ragman went away weeping, bleeding, and puling his cart with one arm. He did not go too far before he came upon a drunken homeless woman shivering from the cold. Quickly, the ragman removed the empty bottle and covered her with a warm blanket. He then hurried on, left the city, he was exhausted. He laid down and died on the city dump. It grew dark. 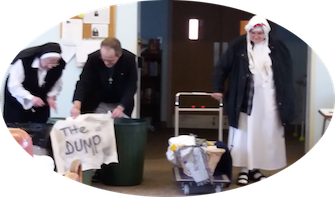 Friday, Saturday, and Sunday morning passed. Then, as the sun rose on Sunday, the ragman rose and slowly folded the blanket, jacket, took off the bloody bandage, and the wet handkerchief. He was shining white. A young sinful woman stood before him and said her name... all the associates said their names and began to smile. The Resurrected Jesus was present and we repeated the "Alleluia" after the Ragman: Jesus had sung it.

During refreshment, groups formed and the associates shared examples, from the life of Jesus and their own lives, of compassion, love, peace.

The Associates then went to the chapel and spent quiet moments with Jesus, the Redeemer. At 4:30 p.m., they joined the Sisters for Vespers and renewed their commitments. Three new members made their frst commitments. Supper followed. Two special visitors from Rome had joined this assocaite meeting: Sister Johanna - Superior General and Sister Júlia - Vicar General of the Sisters of the Divine Redeemer. It had been a wonderful and blessed day.