On Thursday, August 4th, 2016, bright and very early in the morning, Sister Geraldine and Sister Jean joined Bishop Malesic, from the Greensburg Diocese, for a day of “Prayer for World Peace” in Emmitsburgh, Maryland. The 29th annual Pilgrimage included two Deluxe Coaches with 40 passengers in each. We arrived at the National Shrine Grotto of Our Lady of Lourdes {a replica of the Lourdes Grotto in France} where we made a visit in the Chapel and then proceeded to the Shrine where Holy Mass was celebrated. Bishop Malesic was the presider and Homilist. After Holy Mass, we had a boxed on the bus. After lunch we had a special Holy Hour in the Chapel. This special Holy Hour consisted of Rosary, Adoration, Chanting the Chaplet of the Divine Mercy. Reconciliation was available. Bishop Malesic gave the homily. 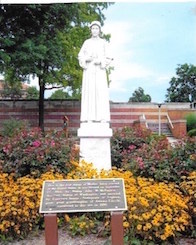 We went three miles down the road to the National Shrine of Saint Elizabeth Ann Seton. We viewed a movie of her life. In her museum there are two life-size statutes of Sisters attending the sick. One is a Daughter of Charity and the other is Mother Seton as a Sister of Charity. The Daughters of Charity is a group of Sisters from Cincinnati, Ohio who joined Elizabeth Ann Seton but kept their original title and headdress. We visited the Chapel where Mother Seton’s funeral Liturgy was held and saw the actual room where she died.

Mother Seton's statue is at the
National Shrine Grotto of Lourds

Mother Seton’s, only living child, Catherine, was with her when she died. She was 22 years old. At the age of 46, she became a Mercy Sister in New York and died at the age of 91.

From Maryland, we headed to Gettysburg, PA where we ate supper and then began our homeward journey. We arrived home around 12:45 AM and called it the end of a fruitful Day! 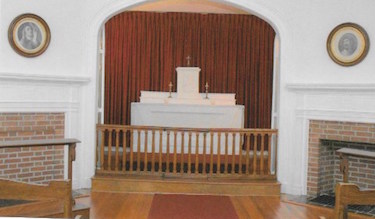