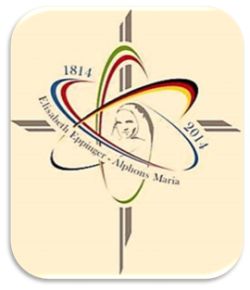 All the Congregation who claimed Mother Alphonse Marie as their Foundress, prepared several years for her 200th birthday day celebration. We were celebrating the beautiful charism of “redemptive love” as given to us, her spiritual daughters and strengthening this spirit within community. The following events were held in the American Region of the Sisters of the Divine Redeemer.

Celebrating in Song: Members of the Elizabeth Forward Chorus together with Sister Geraldine and Sister Michaela joyfully added their voice of praise and thanksgiving for this special birthday of our Foundress. Friends, associates, volunteers, auxilians, and relatives of Mother Alphonse Marie attended this celebration on April 6, 2014 at Divine Redeemer Motherhouse in St. Ann’s Hall.

Deepening our Knowledge: Special 200th Anniversary Inter-congregational calendars were distributed to each of our associates, employees, volunteers and regular Sunday mass worshippers at the Divine Redeemer Motherhouse chapel. The associates also received a copy of the life of Mother Alphonse Marie entitled “The Mystic of Niederbronn”.

Redeeming Waters of Forgiveness: A moving prayer service with water was held at the beginning of Lent. A small glass of water symbolizing past hurts, misunderstandings were taken up and emptied into large crystal bowl the altar of sacrifice reminding each Sister to pour out hurts and disappointments into bowl of the Redeemer’s Mercy.

Affirming Goodness: During Holy Week, each Sister received an envelope which contained a letter describing the goodness, kindness, the gift that each Sister in the community recognized and for which she thanked God in that particular Sister. The goodness seen in each other strengthened the bonds of “redemptive love” as witnessed in community.

Honoring the Dead: In June, several car loads of Sister drove to Shanksville, Pa to honor those who perished in an airplane crash on September 9, 2001. Prayers were offered at the 40 marble markers, each bearing the name of a heroic soul who had died in the crash diverting the plane head for the White House. This trip was made in lieu of our Sisters traveling to Oberbronn for the international celebration of Mother Alphonse’s Birthday Holy Mass. We honored those who gave their lives for our country. They were powerful examples of “redemptive love”.

The Sisters processed into chapel each carrying a lighted vigil which was then placed on the display by the Blessed Mother altar. Sister Rosemary, our Regional Superior, welcomed Father Kirby and Father Litavec and invited guest. The Mass of the Divine Redeemer was celebrated. The intercessions were the same as were being used in Oberbronn with all our Sisters.


The Offertory Procession included the following: our Holy Rule Book, a small crucifix which had been worn by the Sisters before the change habit, praying hands, a freshly baked load of bread and grapes, the flags of the Provinces and France together with the water, wine, and ciborium. As these were presented, Sister Rosemary explained the symbolism of each of the gifts. 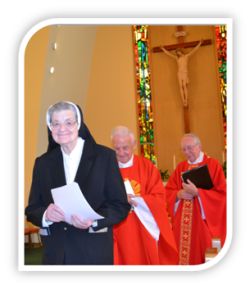 Following Holy Mass, there was a festive dinner during which was a short program about the history of our Congregation and the charism of Mother Alphonse Marie. Everyone felt at home and the presence of our Foundress was experienced by all. 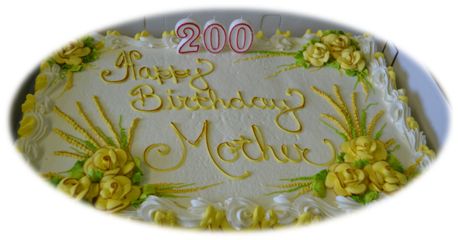