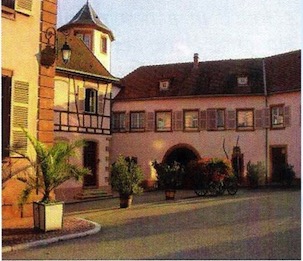 In 1857, Mother Alphonse Marie was looking for new house because of the stream of postulants from France, Germany and Austria, the house in Niederbronn became small. The Mansion in Oberbronn was offered to her. She decided to acquire this property. She never lived there, yet, daily came, taught and encouraged her dear Novices.

After death of Mother Alphonse Marie the Oberbronn Convent became Motherhouse od the Congregation. Now, the Motherhouse is the centre of a large international family from Europe, Africa, Asia and America.

Mother Alphonse Marie was buried at the cemetary of the Sisters in Niederbronn, on August 2, 1867. On November 8, 1950 her mortal remains were transferred to the Oberbronn Motherhouse, the Oratory, on the left side of the Choir of the Chapel.
This Oratory has become a place of contemplation and prayer for the Sisters living in the Motherhouse and those who come from different countries, as well as for other visitors. 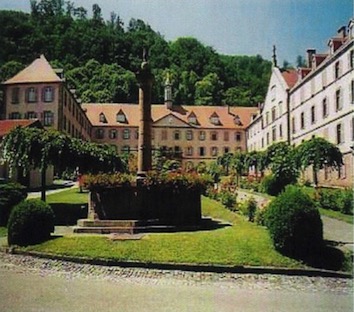 In the Niederbronn Convent there is also the Chapter hall, another significant place. Ther are two large portraits on the wall from the time of establishing the Congregation. One of the pictures shows our Foundress, Mother Alphonse Marie and the other one shows her and our first Spiritual Director, Father David Reichard.

The centre of the spirituality of our Congregation is Jesus Christ. He is the source of salvation, the life and happines for all.

“Joyfully you will draw water from the spring of salvation.” (Is 12:3)

For reflection:
Mother Alphonse Marie drew from this source. The call of the Prophet Isaiah is addressed to me as well as to everyone. It is an invitation: Come and draw. Come and refresh yourself. Come...
==> What does this source means to me?
==> Do I search for this source in my daily life?
Who we are
SDR ConregationMother Alphonse MarieSDR HistoryAmerican RegionSDR PatronessDivine RedeemerBeatification of MAM
Saint of the Day
Sts. Michael, Gabriel, Raphael, Archangels
We Remember
September
Merciful Jesus, grant them eternal rest.