Elizabeth discovered more and more how much God loves all and wants their happiness. She had the deep desire to consecrate her life to God and thus to make people know God and love Him. During the course of the year 1848, she realized that she is called, with the help of her parish priest, to found a religious Congregation. 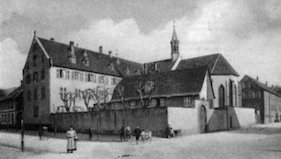 On August 28, 1849, Elizabeth Eppinger left her parental home and together with four young girls of Niederbronn and its surroundings, moved to a small house that was later called “Little Convent”. Here, Elizabeth received the religious habit and assumed the name “Sister Alphonse Marie”. With motherly love she taught her first followers in the “chapter hall” speaking about the spirit that has to animate them in the service of God and their brothers and sisters.

The first Sisters responded to the needs of the sick in the town and its surroundings. They fed the school children with warm meals and took care of orphans. From the Little Convent, Sisters were sent out to open other convents in France, Germany, Austria and Hungary.
As the number of postulants increased, it was necessary to enlarge the Little Convent.

In 1852, the chapel and the enlarged convent were dedicated. Until 1880, the Little Convent was the Motherhouse of the new Congregation. A few years later, the new premises were also not sufficient. Mother Alphonse Marie, as Superior General, acquired a former mansion in Oberbronn. In 1858, the Novitiate was transferred to Oberbronn. In 1880, the General Council moved there also. Thus, Oberbronn became the Seat of the Congregation of the Sisters of the Divine Redeemer.

The Fist Convent saw many renovations. Today, the building is a house for retired Sisters and the people from Niederbronn and the neighboring areas who need nursing care. 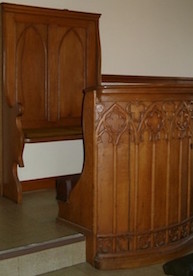 Mother Alphonse Marie, from her own experience, encourages her followers:
“You have come to live the life of Jesus Christ. Discover Him, contemplate Him continuously … in order to model your lives on His life.”

For reflection:
==> Do I respond to the calling of God in everyday life?
==> Do I read the Gospel, in order to know Jesus better?
==> Do I experience that God speaks to me through the Scripture?
Who we are
SDR ConregationMother Alphonse MarieSDR HistoryAmerican RegionSDR PatronessDivine RedeemerBeatification of MAM
Saint of the Day
Sts. Michael, Gabriel, Raphael, Archangels
We Remember
September
Merciful Jesus, grant them eternal rest.