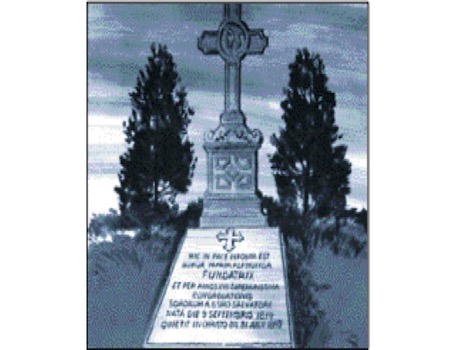 The cemetery of the Sisters had been laid out in 1853, on the outskirts of Niederbronn, on the road to Reichshoffen. Here many Sisters have their final resting place. Both Founders, Mother Alphonse Marie and Father Reichard, who passed away at the end of July 1867, had also been interred here.

With the opening of the Process of Beatification of Mother Alphonse Marie, in 1950, her mortal remains were transferred to Oberbronn. During the years 2004 – 2005, the cemetery was re-arranged and the lower part was laid out anew.

From 1854, there was a farm next to the cemetery, managed by a community of brothers. Later on, the building accommodated orphans, then sick sisters. This is no longer property of the Congregation.

Shade and light accompanied Mother Alphonse Marie’s path which had no other goal than to seek and to fulfil the will of God, knowing that this is possible only with the help of his Spirit.

“Jesus, show me the way I have to go. I want only what is Your will.” (Mother Alphonse Marie)

Jesus said to Martha: “I am the resurrection. Anyone who believs in me, even though that person dies, will live, and whoever lives and believs in me will never die.” (Jn 11:25-26)

For reflection:
==> What does a cemetery say to me?
==> Do I believe in the power of God, in His promise to save me from death?
==> Do I believe in an eternal life, a life of plenitude, an eternal home with God?
Who we are
SDR ConregationMother Alphonse MarieSDR HistoryAmerican RegionSDR PatronessDivine RedeemerBeatification of MAM
Saint of the Day
Sts. Michael, Gabriel, Raphael, Archangels
We Remember
September
Merciful Jesus, grant them eternal rest.