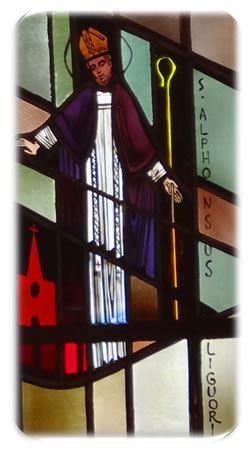 Patron Saint of priest-confessors and moral theologians, and arthritis sufferers

The Order of the Daughters of the Divine Redeemer has chosen St. Alphonsus Liguori and St. Teresa of Avila as its patrons, so that through their intercession and patronage, the genuine religious spirit might always be preserved, because these two saints, as is well known, have completely renewed the religious spirit of the Congregations that they founded. And also, since these two saints are greatly and confidently honored by the pious virgin through whom God desires to inaugurate this Order.

Mother Alphonse Marie received the name Alphonse Marie because her devotion to St. Alphonsus was great. She had chosen him as her guardian. In her ecstasies, Elizabeth heard the voice of Alphonsus, without however seeing him. St. Alphonsus wanted the Congregation to come to the aid of his favorites – the poor and the abandoned. The meek and zealous Fonder of the Redemptorists had also showed her many of the less known happenings of his life. Elizabeth’s deep respect for him was certainly one reason why from the beginning, the Sisters were called Daughters of the Divine Redeemer. Our Mother Foundress wanted to imitate her holy guardian particularly in interior piety, in zeal for souls and in unbounded trust in the divine mercy.

St. Alphonsus, pray for us and grant for us a true devotion to Mary and help us in matters of our Congregation.

Prayer: O God, who constantly raise up in your Church new examples of virtue, grant that we may follow so closely in the footsteps of the Bishop Saint Alphonsus in his zeal for souls as to attain the same rewards that are his in heaven. Through our Lord Jesus Christ, your Son, who lives and reigns with you in the unity of the Holy Spirit, one God, forever and ever. Amen
Who we are
SDR ConregationMother Alphonse MarieSDR HistoryAmerican RegionSDR PatronessDivine RedeemerBeatification of MAM
Saint of the Day
St. Ildefonsus, Bishop
We Remember
January
Merciful Jesus, grant them eternal rest.
Mass Schedule:
7:30 AMMonday:
7:30 AMTuesday:
7:30 AMWednesday:
7:30 AMThursday:
7:30 AMFriday:
8:00 AMSaturday:
8:00 AMSunday:
8:00 AMHolidays:
Holy Hour - Adoration:
Thursday before First Friday: 7:00 - 8:00 PM