31. Sts. Joseph Of Arimathea and Nicodemus

Sts. Joseph Of Arimathea and Nicodemus 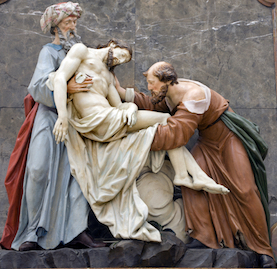 In the latest edition of the Roman Martyrology, the Church has coupled the feast of Joseph of Arimathea and Nicodemus, the two holy men who took the Body of Jesus down from the Cross, wrapped it in cloths, and placed it in the tomb.

Joseph is unknown to us except for the information that is recorded when he is mentioned in all four Gospels. He was a disciple of Christ from Arimathea, a place probably to the northwest of Jerusalem. He was a well-to-do, devout member of the Sanhedrin, the ruling body of Israel, who was awaiting the Kingdom of God that had been foretold by the Prophets. However, out of fear, he remained a secret disciple.

Joseph did not take part in the resolution of the Sanhedrin to put Jesus to death. Then after the crucifixion of our Lord (at which he was present), Joseph summoned up the courage to go to Pilate and ask for the Body of the Savior.

With the aid of Nicodemus, another secret disciple of Christ, Joseph took down the Body, wrapped it in cloths, and placed it in his newly hewn grave (in which no one had been placed) in a garden near Calvary. This fulfilled the words of Isaiah (53:9) that the tomb of the Messiah would be among the rich. Legends that cannot be authenticated have made Joseph a heroic figure in the spread of the faith to France and England.

Nicodemus is known to us through the Gospel of John. He was a Pharisee and member of the Sanhedrin who was convinced by the miracles of Christ that He was sent from God. In a nighttime interview, Christ told this wealthy and learned inquirer that faith and baptism were necessary for eternal life.

Nicodemus did not then understand but was deeply touched, although he did not yet have the courage to stand up for the Lord. Later, at the Feast of Tabernacles, when the Jewish authorities were planning to kill Jesus, Nicodemus spoke up—though timidly—in the Sanhedrin, reminding them that the Law did not condemn a man until he had been heard in his own defense.

After Christ’s death, Nicodemus came boldly with about 100 pounds weight of merrh and aloes and assisted at Christ’s burial.

Nothing else is known with certainty about Nicodemus, but legends about in the Apocryphal works, The Acts of Pilate and The Gospel of Nicodemus.

PRAYER: God, You alone are holy and without You no one is good. Through the intercession of Sts. Joseph and Nicodemus, grant that we may so live as not to be deprived of Your glory. Amen.
Saint of the Day
St. Marcellus I, Pope
We Remember
January
Merciful Jesus, grant them eternal rest.
Mass Schedule:
7:30 AMMonday:
7:30 AMTuesday:
7:30 AMWednesday:
7:30 AMThursday:
7:30 AMFriday:
8:00 AMSaturday:
8:00 AMSunday:
8:00 AMHolidays:
Holy Hour - Adoration:
Thursday before First Friday: 7:00 - 8:00 PM