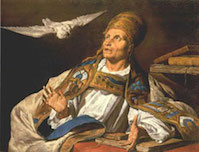 Gregory, the son of a Syrian named John, became a priest in Rome. Because of his great love of learning and holiness, he was elected Pope by acclamation on February 11, 731, while accompanying the funeral procession for Gregory II. He went on to rule the Church until 741.

As Pope, the Saint saw to it that the Gospel was preached to the Germanic people and that churches were decorated with sacred images in opposition to the Iconoclasts, who forbade the use of such images. He also convoked two synods in Rome in 731 and incurred the wrath of the Eastern Emperor Leo the Iconoclast.

Gregory welcomed St. Boniface when the latter made his third visit to Rome in 737, and he sent the English monk St. Willibald to help him in his missionary work. At the same time, Gregory wrote to people of importance on its behalf.

The Liber Pontificalis (the “Papal Book”) states that Gregory was a man of deep humility and true wisdom. He had a good knowledge of the Sacred Scriptures and heir meaning, and knew the Psalms by heart. He was a polished and successful preacher, skilled in Latin and Greek, and a strict upholder of the Catholic Faith. He was a lover of poverty and of the poor, a protector of widows and orphans, and a friend to monks and nuns. He died in 741.

PRAYER: Almighty and eternal God, You willed to set St. Gregory over Your entire people and to go before them in word and example. By his intercession keep the pastors of Your Church together with their flocks and guide them in the way of eternal salvation. Amen.
Saint of the Day
St. Agnes, Virgin and Martyr
We Remember
January
Merciful Jesus, grant them eternal rest.
Mass Schedule:
7:30 AMMonday:
7:30 AMTuesday:
7:30 AMWednesday:
7:30 AMThursday:
7:30 AMFriday:
8:00 AMSaturday:
8:00 AMSunday:
8:00 AMHolidays:
Holy Hour - Adoration:
Thursday before First Friday: 7:00 - 8:00 PM